A walking animation is a rather straight forward fix. However, for much more complex animations like a spinning hook kick, then the adjustment is not that easy to define.

Most animation tools come with a way to fix this problem automatically… or at least some good developer has come with a solution and he has been kind enough to share it with the world in the form of a script, plug in or add-on. However, since I’m doing my animations with my very own animation studio, then it seems that I’m out of luck.

No matter, though, for if there is a will then there is a way. So I went ahead and created a custom tool to solve this very special need (after all, that is what I do for a living) by trying a very special type of project in Visual Studio where XAML and DirectX coexist together. I won’t lie, this was not an easy experience: The learning curve was very steep and unfortunately the documentation is very difficult to follow. However, once the tool was done, I was able to grasp the main idea behind this kind of projects, and now I can see the benefits of combining XAML and DirectX.

I’m surprised no one has published anything about this type of project. I’m not talking about marketing brochures or news releases (there are plenty of those): I’m talking about the coding side of the story, expressed in terms that are easy to understand. So I decided to create a blog about it.

For those who are really old school (like me), I need to make a quick parenthesis and define XAML as a markup language created by Microsoft, kind of like the language used to create web pages. With this language, we can create quite impressive User Interfaces and implement them using a wide range of technological platforms to create business oriented applications (msdn – 2017).

With the release of the Windows Store and the concept of Universal Windows Platform Applications, XAML has had a huge momentum. It’s been such a success that Microsoft thought about mixing XAML and DirectX. Ever since Visual Studio 2012 was released, if you want to create a videogame or a multimedia application for the Windows Store using DirectX, you will find that this API comes in two main flavors: With and without XAML.

Now, what I learned from the process of creating this custom tool is that the combination of XAML and DirectX is great for Multimedia Applications, but it is my conclusion that this combination may not be quite optimal when building action games.

Before getting to the reasons behind this conclusion, let me show a video that illustrates the interaction between DirectX and XAML so we can have a graphical reference about the topic.

To understand what just happened, we need to look at the block diagram of the inside of this application, and compare it to the “traditional” approach, which I mean, the one without XAML.

When you create a DirectX 11 App (Universal Windows) Project using Visual Studio 2015, the template created (excluding the “Game” class – that one is on me) has the following block diagram: 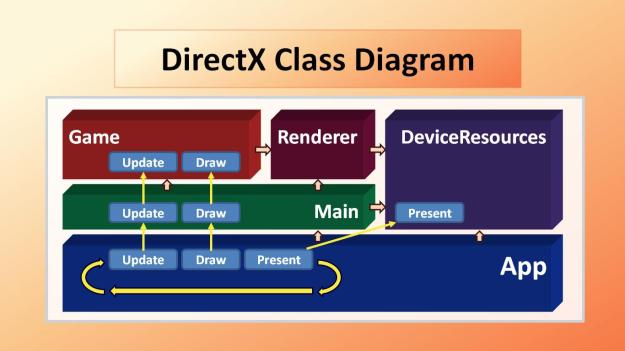 The dynamic here has some similarity with a typical XNA project:

When you create a DirectX and XAML App (Universal Windows) Project using Visual Studio 2015, the template created (excluding the “Game” class – that one is also on me) has the following block diagram:

The biggest, meanest, most complex and most important difference that for some odd reason nobody has ever remarked, is that this new approach is a true multi-thread application.

Here is how things get on fire:

To describe in colloquial terms the implied challenge, we can compare the threads of a multi-thread application with the spoiled children of a highly dysfunctional family:

It gets more volatile if we consider the nature of these threads:

After reading all this rambling, you may be wondering why should we use this template if the implementation of XAML and DirectX is that complex. The answer is in the benefits provided by XAML:

There are some reasons that XAML may not be an important component:

After I created my custom tool, I was able to grasp the “big picture” of mixing both XAML and DirectX. It wasn’t an easy project, and the development strategy described here about messages stored in a common repository may not have been the most optimal approach. I worked before with XAML during the Silverlight days and I have to say that I didn’t find much difference when used for UWP applications.

However, I found controls like the “Open File” and “Save File” dialogs to be essential for Multimedia applications (for me, it was a project saver). Also, I can see the performance benefit that RPG games could get when using text and input controls implemented in an XAML page (for example, sending messages between players using a XAML textbox while still rendering their fancy graphics on the background).

Still, for action games where control response is paramount, I’d still code everything within the main game loop, which makes a XAML page kind of an optional component. Then again, that is my personal point of view.

“Antimatter Instance” is a video game created for the Dream Build Play 2017 Challenge. Forget the contest for a minute, though, and let me tell you how I got here.